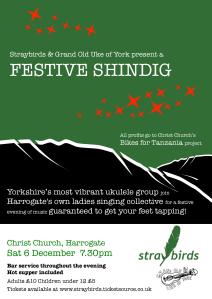 When 180 bicycles rode through the streets of Yorkshire, they changed the face of the region forever. So it stands to reason that with just 166 bicycles, we can do the same for Tanzania. These bikes won’t be used for a cycling race. Instead, the Bikes for Tanzania appeal will provide bikes to the Diocese of Kagera and rural pastors in the region.

In order to raise awareness of the appeal, which has had a huge push in the months following Le Tour, Christ Church is hosting a musical event with local Harrogate ladies singing collective, Straybirds, and vibrant York-based ukelele band the Grand Old Uke of York. The members of both groups are no strangers to collaboration, with their most famous appearance at the Tour de France Opening Ceremony as members of The Band Anyone Can Join, where they supported Leeds-based band Hope & Social.

A vivacious singing collective, Straybirds boast an eclectic musical repertoire and work under the direction of Neil Balfour, a seasoned conductor, vocalist, and pianist. The Grand Old Uke of York are regular hits at festivals, fundraisers, and events across the North of England, and provide a fun musical event like none you’ve ever experienced. Expect nothing less than a fun, lively atmosphere to help set the stage for the festive holiday season.

The evening will take place in the church hall on Saturday 6 December, from 7.30pm. Tickets are just ₤10 for adults and ₤5 for under 12s, which includes a hot supper, and a cash bar will be open for additional fun(d)raising! Ticket are available online here or from the Parish Office.

If you can’t make the event and would like to make a donation to the Bikes for Tanzania appeal you can send a cheque made payable to “Christ Church PCC” and posted to Christ Church, Church Square, Harrogate, HG1 4SW.